Jesuit schools in Limerick before the Crescent:

Early Jesuit schools existed in Limerick between 1565 and 1773. David Woulfe S.J., a native of Limerick, who came as the Popes envoy to Ireland in 1561, set up the first such s

chool. His cousin, a Jesuit scholastic, Edmund Daniel (alias O’Donnell) aided him in running the school. William Goode, an English Jesuit also worked there, and we know about the school from letters written by Goode, which still exist.

There were no holidays at the school, but students were withdrawn by their parents at harvest time, to protect the crops from thieves. Classes took place in very confined space, and students could only attend class in rotation. Students first learned to read, and progressed to ‘read selected letters of Cicero or the dialogues of Frustius. The students copy all the works, as there are no books on sale’. They studied catechism either in English, or in Latin for the Irish speakers. Goode notes that the students were piously inclined and that they had devotions on the feast of patron saints, they prayed the rosary, and went to frequent confession and Communion.

In 1565 the city Council decided that the masters should be paid an annual salary of ten pounds, but this money was not accepted as this was to be raised as a levy on ships entering 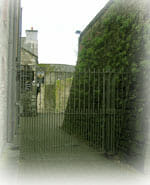 and leaving the port.

Under Queen Elizabeth, there were laws restricting the Catholic faith, and occasionally the sheriff and a captain of the soldiery raided the school. The school moved for a time to Kilmallock to avoid the attention of the authorities.

In 1572 Daniel was arrested, after he refused to take the Oath of Supremacy renouncing the Pope. Daniel was condemned to death, and executed in Cork on 25 th October 1572.

The sites of the early Jesuit schools in Limerick were at at Castle Lane off Nicholas Street, and at Jail Lane, and also for a short time at Kilmallock. A stone from the Castle Lane site, dated 1642, can be seen today at the corner of the Crescent and Newnham Street.

In 1859 at the request of Bishop John Ryan of Limerick, the Jesuits agreed to run the diocesan seminary school of St. Munchin at Hartstonge Street. This was a secondary school from 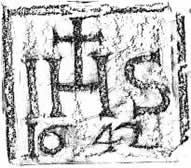 which it was hoped boys would go on to become priests. By 1862 the Jesuits moved to Crescent House, where they offered a full curriculum, which included classical and modern languages, maths, physics, history, geography, and elocution. The school also had a ‘Mercantile Department’ in which ‘an extensive and accurate knowledge is imparted of arithmetic, book-keeping, abstracts and other requirements of the actuary’s office’. Young men were prepared there for ‘the university and the ecclesiastical colleges . the learned professions. the public service, civil and military’.

In 1864 the new Bishop of Limerick, Dr. George Butler, asked the Jesuits to also open a school specifically for poor boys, where no fees were charged, in addition to St. Munchins. And so St. Patrick’s school was opened in Bedford Row. The income from St. Munchins was meant to pay for both schools, but some students left the fee-paying section to enrol in the free school. The new school could not be sustained for financial reasons and because of the workload of the staff at Crescent, who also taught at St. Patrick’s. This school had to close within a year in 1865..

The Crescent lost many boys at 13 or 14 years to boarding schools. And this plight was worsened in 1867 when Bishop Butler decided to re-establish his own seminary at Hartstonge Street. A notable depletion in numbers followed at Crescent House, and the school’s only income was from the tuition fees of students.

The name of the school was changed to the Sacred Heart College. The arrival of a new generation of Jesuit teachers, notably Tom and Peter Finlay, brought a new vigour and prestige to the Crescent in the 1870’s. In 1879 when the results of the first nation-wide Intermediate Examinations were published, a Crescent boy, Charles Doyle, obtained first place in Ireland. This was seen as a triumph for Crescent, and for all schools that received no subsidy from the government.

In the early years the Crescent catered for around 100 pupils drawn from the professional classes, from the ranks of business people, city officials and strong farmers. Even by 1939 the school population remained under 130, and the Jesuit community was identified almost entirely with the upper and middle class population. In the 1940’s the school population grew to 300 boys.

At the time of the Irish war for independence, 1916 – 1922, a Jesuit called Fr. Hackett regularly invited Nationalist politicians to school debates at the Crescent, and he formed a group 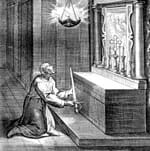 of Crescent students, called the Crescent Volunteers, modelled on the Irish Volunteers, who drilled with arms and live ammunition. The Chief Superintendent of the police in Limerick sent his son to the Crescent, and young Harold Craig joined Fr. Hackett’s volunteers, and became a fervent nationalist. His memories of this time exist in a tape-recorded interview. After the setting up of the Irish Free State in 1922, his superiors sent Fr. Hackett to Australia, probably at the request of the new Government. In Australia Fr. Hackett took a strong interest in social issues.

In the 1960’s entered the free-education system introduced by former pupil and Minister for Education, Donagh O’Malley. Land was purchased at Dooradoyle, in the suburbs, for a new school, and the Minister O’Malley proposed that the new school should become a comprehensive school. The Provincial, Fr. Cecil McGarry agreed, as the Jesuits were attracted by the possibility of returning to the early Jesuit method of funding education, where a sponsor would provide funding, and where the Order could involve itself is assisting children from all backgrounds, including those from disadvantaged areas.

The new Headmaster, Fr. Tom Morrissey entered into lengthy negotiations with the Department of Education to have a Central Concourse, which would promote community, and to

have extensive playing fields at the new site. A stone inscribed ‘IHS 1642′, done in the style of the Jesuit seal, was transferred from the possible site of an early Jesuit school, and incorporated into foundation stone ofthe new school in 1973, to signify continuity with an old and notable tradition.

At the start of the Comprehensive School the Department of Education did not permit entry of girls because the need in Limerick at the time was for boys’ places. The Board of Management decided to go co-educational in 1974, though the intake of girls would be limited because of the still greater need for boys’ places. The aspects of education such as sporting activities, drama, debating, choirs, school outings and societies, which were part of the tradition of Crescent and other Jesuit schools, were taken on as part of the Crescent College Comprehensive from the start.